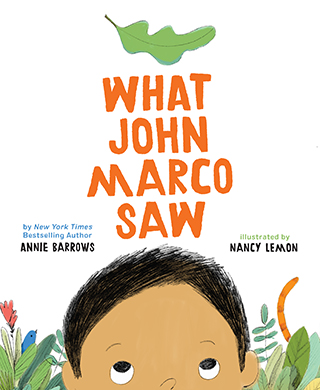 What Did John Marco See?

John Marco saw a tree. It was in his front yard. It was falling down. But since John Marco’s a little kid, no one believed him. They said things like “Trees don’t fall down.”

Guess what happened then.

Now read the book to find out if you’re right!

“While all the older people around him are lost in their own worlds, little John Marco notices all the small—and big—things around him. . . . A sweet reminder to slow down and notice the world around us.”

“[A] magical portrayal of one of those strange and giddy moments that makes an indelible impression on one’s imagination. Best of all, it succeeds in proving that John Marco (and what he notices) is worth everyone’s attention.”