Welcome to the World of Iggy

Where the motto is: “It Seemed Like a Good Idea at the Time”

Say hello to Iggy Frangi, a nine-year-old kid who never met an impulse he didn’t like, a kid heroically, selflessly dedicated to the great American tradition of doing nutty things for no reason at all, a kid who might drive his parents and teachers and other stray adults bananas, but who always has a good time himself, because in a world containing coconuts and gardening tape and (whoops) shaving cream, how can you not have a good time?

Book 1: The Best of Iggy

We all do things we wish we hadn’t done. It’s just that Iggy does more of them than most people. But to be honest, most of the things he does are also really fun. Like the thing with the trampoline and the roof of the shed. That was great. He would do it all over again in a second. The thing with the shaving cream? Okay, maybe he shouldn’t have done that, but it was still fun. And it’s not like anyone got hurt. But what about the thing with the desk? The desk and the crash? The desk and the crash and the firefighters? Iggy doesn’t want to talk about it. So you’ll have to read the book.

This, the first volume of Iggy’s adventures, has been described as “deeply ethical” and “a practical application of moral theory” and also “this is really funny.”

Book 2: Iggy Is Better Than Ever

This isn’t one of those books.

Book 3: Iggy Is the Hero of Everything

Do you know that there are people in this world who think cheese is a dessert? There are! These people have a different interpretation of the word “dessert” than I do. There are also people in this world who think that what Iggy does in this book is bad. Also unsafe and careless and irresponsible. These people say that what happened to Rudy Heckie and his dad is all Iggy’s fault. They say it’s all Iggy’s fault that he lost his Halloween candy. That is their interpretation. But Iggy and I have a different idea. We think that Iggy is brave and resourceful and caring and hardworking and heroic! We think that he should get a trophy for the things he does in this book, plus he should get his Halloween candy back.

Which interpretation is the right one? Read the book and make up your own mind. 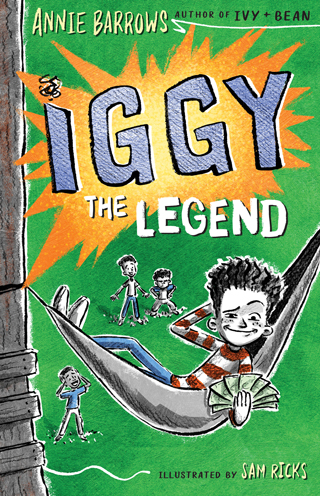 If there’s one thing kids know about, it’s blame. Kids are always getting blamed for stuff. But blame is often (usually) wrong and unfair. For example, Iggy is being blamed for a certain thing, a certain thing involving money and teeth. Would he have done that thing if his so-called friend Diego hadn’t demanded money from him? Of course not! Therefore, Diego should be blamed too. Iggy’s sister Maribel wouldn’t lend him any money, so she should be blamed as well. And Iggy’s mom and dad, who are very upset because Iggy broke a rule, should also be blamed—because they forgot to tell him the rule.

In fact, everyone but Iggy deserves some blame for this certain thing involving money and teeth, and this book will prove it!