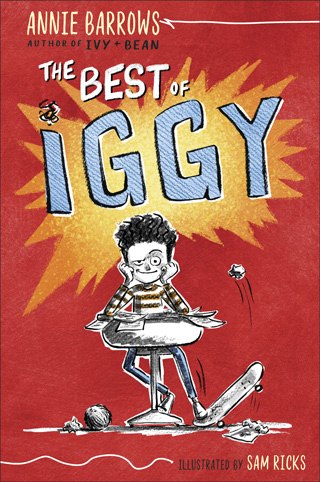 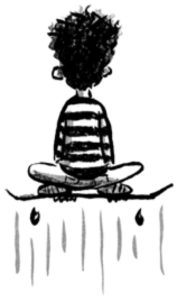 Kirkus Reviews
Iggy Is Better Than Ever
By Annie Barrows. Illus. by Sam Ricks.

Iggy Frangi, a 9-year-old fourth grader first introduced in The Best of Iggy (2020), is not particularly adept at anticipating adverse outcomes, and his analysis after things go wrong is not especially accurate. He’s more of a doer than a dreamer. “Mostly Iggy gets in trouble. He does Thing 1, and then Thing 2 happens, and then, unfortunately, Thing 3 happens too. In a wry direct address, the narrator/apologist affirms that Iggy will not be transformed, that this is not about a kid who is “better at the end than he was in the beginning”—not “about a kid who plants flowers by the side of the road.” Thing 1: Iggy, who appears White, and two of his best friends, Diego, who has brown skin, and Arch, who appears Black, discover a creative use for gardening tape. As a result of Thing 1, Thing 2 happens: Iggy accidentally clobbers (but doesn’t permanently damage) an elderly White teacher with a basketball. Thing 2 leads to Thing 3: a spectacular, and, as it turns out, literal face-plant, “one of the best things that ever happened” in Iggy’s life. Iggy wouldn’t hesitate to do it all over again, and his fans will be the richer for it. Ricks’s sketch illustration features light-hearted diagrams and cartoon interpretations of Iggy’s thoughts and misadventures.

Kirkus, starred review
Iggy Is the Hero of Everything
By Annie Barrows. Illus. by Sam Ricks.

Iggy’s intrepid and clever selflessness is open to misinterpretation.
This installment in the chronicles of 9-year-old Iggy Frangi’s (Iggy Is Better Than Ever, 2020, etc.) encounters with unintended consequences examines intent as an element crucial to gallantry. After learning of a break-in at the Heckies’ house nearby, Iggy has a plan for thwarting the potential theft of his best Halloween candy, along with his family’s other valuables. It’s pretty simple: Set a decoy and dig a trap. It’s hardly Iggy’s fault when annoying 7-year-old Rudy Heckie is injured during the trap construction. (No, Rudy’s finger is not severed.) Nor is it Iggy’s fault that Mr. Heckie hurts his tailbone when he trips over Rudy and falls into the trap dug with the shovel that didn’t sever Rudy’s finger. The pace and energy of Barrows’ narrative matches Iggy’s focused enthusiasm for his (somewhat ill-conceived) plan. The apologist narrator, very much on Team Iggy, provides evidence that points to Iggy’s heroism. Ricks’ cartoon illustrations are a lively and hilarious complement to Iggy’s thoughts and experiences. In them, Iggy, his family, and the Heckies appear White. Iggy’s charm is substantial, so blithely optimistic are his intentions and so singular (yet familiar to any well-meaning human) his way of seeing the world. Iggy’s ideas are clear to him—it’s everyone else who ends up asking, “What were you thinking?”
This genuine and energetic, if hapless, antiheroic hero grows on you. (Fiction. 8-11)