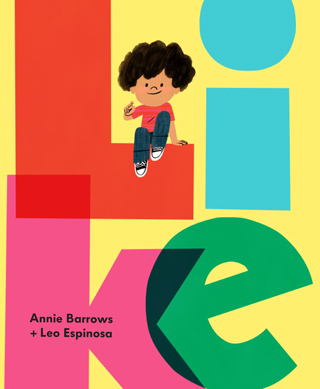 Hello.
You are you and I am I. We are people. Also known as humans. This makes us different from most of the things on Earth.

. . . so begins Like, a new picture book that explores how much human share, even when we are different, using the scientific method:

Are we like tin cans? Not so much.
Are we like an excavator? Ha! We wish!
Mushrooms? Nah. We have legs.
What about a nice hyena? It’s true that hyenas and humans are both animals. But hyenas can’t tell jokes. Hyenas don’t make plans. Hyenas don’t even know when their own birthday is!

No, when we really think about it, what we are most like is each other!

“This uproarious picture book works on kids’ funny bones to get across the argument that, despite any superficial differences, we humans are all alike. . . . The book’s silliness makes its argument accessible to all.”
–Booklist
starred review