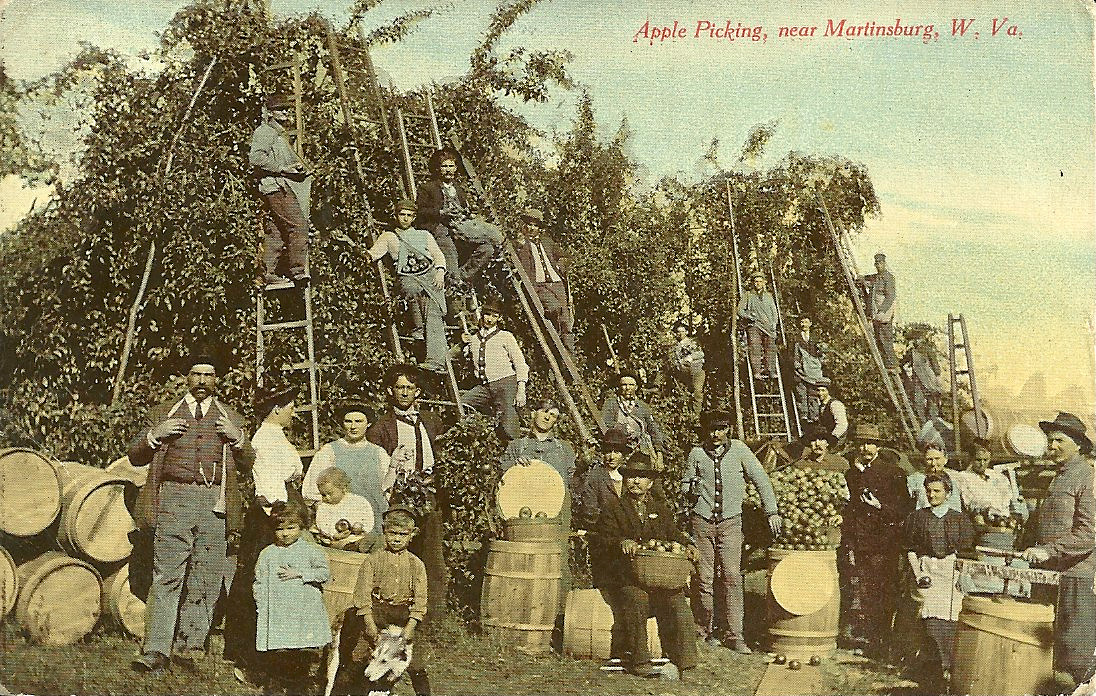 The Gypsy King was dead.

He’d been picking apples for Mr. Kinney when all at once, he’d turned blue and dropped like a stone, his head banging from branch to branch as he went.

“If he’s a king, why’s he have to pick apples?” interrupted Jottie.

“He’s a gypsy king,” said Felix. “Gypsies like picking apples.” He continued: Now the Gypsy King was lying dead in a bronze coffin with a rope tied round his feet so he wouldn’t climb out to haunt his people and a red kerchief stuffed into his mouth so he wouldn’t tell their secrets.

“What kind of secrets?” asked Jottie.

“Stop asking questions,” Felix commanded. The Gypsy King had five dollars clutched in his stiff fingers to pay for his ferry ride across the River Styx and five thousand gypsies were coming to town for his funeral. Two thousand of them were already camping at Mr. Betts’s house, not just in the back yard, but in the front yard too and all along the street—

“My daddy called the sheriff,” Sol broke in eagerly. “Sheriff said he couldn’t do a thing about it, and my daddy says they paid him off. They got lots of money, even though they’re raggedy as can be—”

Felix retook the field, “Mr. Betts put the bronze coffin in his best parlor, the red one, and the gypsies lit a fire in there, right in the middle of the floor. It scorched the ceiling and the walls, but Mr. Betts don’t care because they paid him in gold for it, real gold, so he moved the coffin into the other parlor and they scorched that one too!”

“Hushup!” snapped Felix. “I’m going to stuff a kerchief in your mouth, see if I don’t. So now the coffin’s outside, right in the yard, and you can see him, you can see his bony fingers with the money in between, and me and Vause are going to sneak down in the middle of the night and take it, like this—” he flicked his hand.

“They’ll knife you,” said Sol. “They’ve got knives this long.”

“You don’t know,” said Felix. “Anyway, they’ll be asleep, because every night they drink wine until they’re falling-down drunk, not just the men-gypsies, but the girl-gypsies, too, and they just sleep where they drop. Ain’t that right, Vause?” All eyes swung to Vause and he nodded. “Vause’s been watching them from over the fence.”

“You steal from a dead man, you’ll go to hell,” said Jottie.

“Puh,” sneered Felix. “They’re the ones going to hell.” His black eyes, glinting with laughter, circled his listeners. “You know what Vause saw them do, some of them? He saw a lady—”

She gave him a long look to show him he couldn’t boss her, and then turned, insouciant, on her heel. Her pace was majestic until she was safe inside the house, and then she ran, her bare feet making no more sound than a snake on the shining floor. She hurried upstairs to her bedroom, and, stopping only long enough to ascertain that it was sister-free, plunged her hand under her mattress to gather her trove. Counted, recounted, and deposited in her pocket, it clinked pleasantly as she hurried toward the stairs.

She sighed and turned back to enter the baby’s room. He was standing in his crib, warm and damp with sleep, his eyes hopeful. “Go back to sleep,” she said.

He shook his head. She sighed again, but speed was crucial. She didn’t have time to rub his belly until his eyes closed and his mouth opened. Her mother might wake, any moment. “All right, then,” she said, “but you have to be good.”

He held up his arms, and she hauled him over the deep side of the crib and gripped him against what would be, in future, her hip. Contentedly, he burrowed his face into her neck, his fat hand curling around her braid. His weight made the stairs creak under her feet, but still, she was fast.

On the lawn, the boys were clustered close, squawks of disgust and laughter rising from them like steam. She didn’t care. Whatever it was, she didn’t care because she was going to see the future and they weren’t. She slid by them, unnoticed, and then ran, Emmett bouncing against her chest. He chuckled, enjoying the ride, and when she came, suddenly, to a halt, he hiccupped.

“Look!” she breathed, transfixed, and obediently he looked, at the bright seething picture spread out before them in R. Anderson Betts Undertaker’s front yard. “They’re gypsies!” They were, too. You could tell it in the way they did what no one did—ladies stretched out on the grass in the full sun; men crouched in circles, smoking; old ones of no gender stuck like wizened dolls in straight chairs. In the center of the lawn, on a heavy table that Jottie thought she recognized from the Betts dining room, the bronze coffin gleamed like a second sun. Inside lay the King. Jottie could see the red kerchief against his sunken skin. There was a jug in there, too. Felix hadn’t said that. He didn’t know everything. She gave Emmett a squeeze of excitement, and he looked at her, interested in her wonder. “Gypsies,” she explained, “are folks who go everywhere all over the world in little carts and they don’t follow any laws or rules and they can tell the future. They’ve got some special secret magic from being gypsies, and they can see right into your future, just as clear as you and I can see—” she glanced around— “those stomped-up dahlias over there.”

“They don’t particularly like to be stared at,” said a voice.

Jottie peered into the leaves above her. Caroline Betts was too old and prim to be climbing trees, but there she was, spotlessly clean in a white dress, with a blue ribbon in her sandy hair.

“I’m staying out of the way,” explained Caroline. She waved a book. “I’m reading David Copperfield.”

“A little, maybe,” admitted Caroline calmly. She pulled a branch aside. “That baby looks awful heavy. Doesn’t he know how to walk?”

“He knows,” said Jottie. She grimaced at Emmett. “He won’t, though.” He patted her cheek gently. “Anyway, I’m not just staring. I want my fortune told.” She turned away to search the yard for fortune-tellers. Someone veiled, she thought. Someone veiled and old, with gold earrings. A turban?

“They’re here for a funeral,” said Caroline. “Not a carnival.”

“I know,” said Jottie. “But I might never get another chance.”

Caroline pursed her lips. “You have to pay, you know.”

“I’ve got money,” Jottie said, her eyes searching over yellow scarves, fringed shawls, a bright flowered vest, a man in striped trousers, singing with his head thrown back. She wished she could hear the song. She wished she was there in the circle around him, where men passed a jug—of wine, probably, like Felix said—and listened with their eyes closed. The man’s voice wobbled with mournful feeling and Jottie’s envy reached new heights. If she were a gypsy, she’d sing along, with her eyes closed and her voice full of yearning.

Caroline’s voice broke into her thoughts. “Try that one over there by the barn. See? The one in the black dress. In the chair. Next to the one with the roses.”

They were glorious, the two gypsies. The one in black had gold earrings, not just dots, but long drips of gold. The girl beside her, with pink roses on her dress, wore her hair down in wild curls. They didn’t seem surprised by what she wanted, but they didn’t seem eager to give it to her, either, no matter how many times she showed them her money.

“Your fortune,” repeated the gypsy lady. She smiled at Emmett and waggled her fingers at him. He waggled ebulliently back. She pulled a red string from her pocket and dangled it before him, as if he were a cat. “What would your mama say if she knew you were here?”

“Well.” Jottie hesitated, imagining it. Tears. How could you? I suppose it’s my own fault. My head, my poor head. “She won’t. She’s taking her nap.”

The gypsy pointed her chin at Emmett. “Don’t he walk?”

“Sure he will,” said the woman. She pulled Emmett’s warm bulk from Jottie’s arms and set him on his dimpled feet. Emmett stared up at her in dazzled surprise. “One little step,” she crooned, holding out her hand. Emmett smiled, stepped toward her, and took her hand.

Lifting Emmett into her lap, the gypsy stroked his face toward hers. “Look at you,” she murmured. “Could be one of us.” She circled the red string around his chubby wrist and tied a knot. “Look, baby. New bracelet. Sit,” she added to Jottie.

It was happening. Jottie sank to the beaten grass, her eyes locked on the gypsy’s face.

“No!” Jottie sneered. “Adventure, that’s what I want—I’m thinking I’m going to run away soon, you know. I already started chopping some wood out of the barn, just a little, so my daddy don’t notice, just bit by bit, for a raft, I saw how to in a book, you—” She stopped. The other end of the red string was tied around the gypsy’s waist. Jottie rose to her feet. “Undo him.”

“What?” asked the gypsy.

“Give him,” Jottie demanded, holding out her hands.

The gypsy smiled. “Ah, he likes it here.” She rubbed Emmett’s round stomach. “Dontcha, baby?”

She lunged for him, kicking at the gypsy’s legs. “Give him! Give him!” she shrieked, wrapping her fingers around the string to yank it taut.

“What’re you doing?” squealed the gypsy, recoiling. “Hey, girl! Stop it!” She tried to shove Jottie away, but the little girl held on tight and bent down. “What you doing?” cried the gypsy again, and the gypsy girl at her side slapped the back of Jottie’s head as she ground the string between her teeth. “Get outta here!”

Emmett wailed, clawing for her, and then she bit through, snatching him into her arms, away from the slapping hands, away, shuddering from the sour taste in her mouth, running away, away to the safety of the sidewalk.

Jottie took a crumpled breath. “She tied a string around him.” She held out Emmett’s wrist.

Caroline glanced at it and shrugged. “It’s just a string.”

Jottie rubbed the traces of tears from Emmett’s cheek. “It’s all right,” she told him. “Everything’s fine.” She stretched out her legs to take stock. Four bruises, more coming. “I never got to find out the future either.”

Caroline Betts smiled again. “I don’t think you need a gypsy to tell your future.” She nodded toward Emmett. “That. More of that.”

No. Once again, Jottie stood. Nobody knew what would happen to her. They thought they did, but they didn’t. She dragged Emmett into her arms once again and set off for home.